Airglades Airport is in the Florida Everglades, hardly used, and surrounded by thousands of acres of sugarcane and other cropland. It is also a leading candidate for an FAA program initiated in 1996, aimed at privatizing public airports.

This airport was built in 1942, in response to an urgent plea by British Prime Minister Winston Churchill to President Roosevelt. The weather conditions in the UK were not agreeable to training pilots needed to match superior German air power. So, the U.S. established six airport facilities in sunny, southern states, at which British pilots could train. One of these was constructed west of Clewiston, just southwest of Lake Okeechobee. Contract pilot instruction commenced on 11/12/42, provided by Riddle-McKay Aero College. By the end of the war, more than 1,700 pilots had been trained at Riddle Field.

In 1996, Congress passed legislation enabling FAA to initiate a new program, to allow up to five airports to become privatized. Hendry County obtained this airport as war surplus. When approached by a ‘secret’ private party, Hendry County authorized the expenditure of up to $100,000 for legal services in 2010. FAA granted approval of their preliminary application on 10/18/10.

There is no substantial data documenting the operational use of this airport. It is in the middle of a sugarcane growing region and serves as a base for just a couple dozen small aircraft. The best estimate is approximately thirty flights per day. 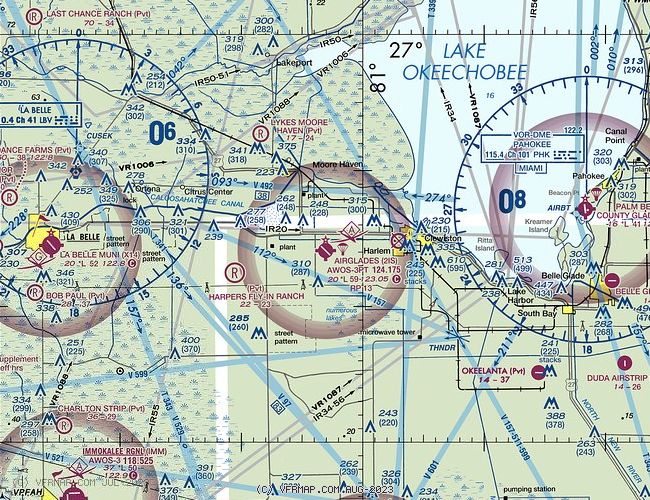 2008-12-15: Federal Register. An announcement that airspace around Airglades was being classified ‘Class E’, as needed for a GPS approach. FAA POC Mark Ward, at ASO.