The busiest commercial airport in South Carolina, Charleston International is owned by the U.S. Air Force but operated as a joint-use airport, with the Charleston County Aviation Authority. The airport sits on 2,060 acres and is seeing rapid growth as a production facility for Boeing.

FAA air traffic controllers staff a 24-hour tower, serving 280 flights per day. The airport is home base to 45 aircraft. The airport has roughly 65 daily commercial passenger departures. The three legacy airlines (American/USAirways, United/Continental and Delta/Northwest) all provide service to their major hubs in the eastern U.S., including: Atlanta, Charlotte, New York (LGA, EWR), Washington (DCA, IAD), Chicago (ORD), Houston, DFW, Miami and Philadelphia. Southwest began service in 2011, and has seven daily departures; JetBlue began service in 2013, and has three daily departures. Aside from the Delta and Southwest flights, nearly all commercial flights use smaller commuter jets and turboprops.

The Charleston area lost thousands of federally subsidized jobs, when the Charleston Naval Shipyard was closed down in the 1996. This made state officials hungry for jobs, so they offered generous tax breaks to entice Boeing to locate new facilities in their state. Their efforts worked, though in the larger picture jobs gained in South Carolina come at the cost of jobs lost in Kansas, Washington and at other established Boeing workplaces being pressured to match sweet tax deals. 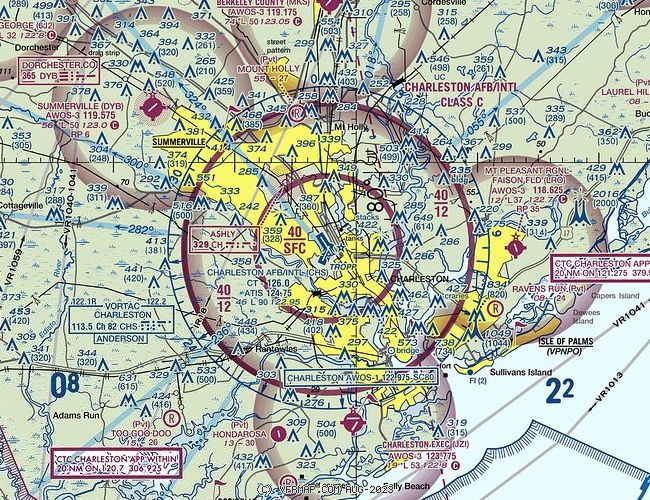