Rogers Municipal Airport in northwest Arkansas sits on 460-acres and is the home of the aviation fleet for Wal-Mart, whose corporate headquarters are in nearby Bentonville. Thus, the airport is used extensively by Wal-Mart officials, as well as by vendors flying on trips to negotiate with Wal-Mart. Additionally, the airport is used for those flying to nearby Beaver Lake, which offers 30,000 acres of fishing and other activities. The airport FBO, Beaver Lake Aviation, is a wholly owned subsidiary of Wal-Mart Stores, Inc.

There are 118 aircraft based at this airport, including: 73 single-engine props, 14 multi-engine props, 28 jets and 3 helicopters. A contract tower was opened in 2005 when the airport had approximately 25,000 annual operations. The tower provides ATC services from 5:30AM to 7:30PM on weekdays, and from 7AM to 9PM on weekends. FAA’s ATADS data shows that, in 2012, there were 13,933 operations (thus, 38 operations/day). This equates to two takeoffs per hour of ATC operation, or an average of 38-minutes between takeoffs.

The contract for the control tower costs roughly $400K annually. Due to the very low traffic level at this airport, the airport authority is required to pay part of the ATC contract cost. Thus, in 2005, Rogers paid 31% of the contract, or $131K. Because airport operations have since dropped in half, Rogers was expecting to see their share climb to roughly $190K. However, despite the chronic gridlock in Washington, DC, lobbyists helped get legislation passed to limit the city’s share to 20%. So, Roger’s contract share dropped from $190K to $81K, while FAA pays roughly $320K annually for an airport that arguably should not even have a tower.

Adding to the puzzle of ‘why is this tower subsidized’ is the fact that this is NOT the only control tower serving this corner of Arkansas. The other airports with control towers include:

As a side-note, Wal-Mart changed their slogan twice during this same timeframe. They used “Always low prices” for nineteen years, but changed it in 2007 to “Save Money. Live Better.” Then, in 2011, they changed the Wal-Mart slogan again, this time to “Low prices. Every day. On everything.” One wonders what the next slogan may be… 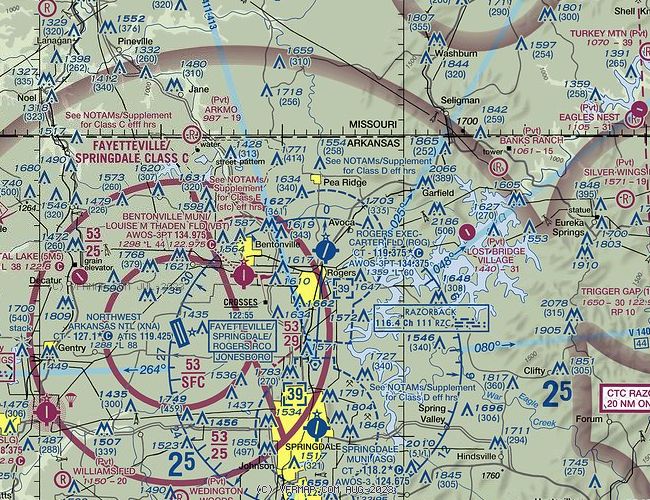