Scottsdale Airport was once one of the busiest single-runway operations in the country. While the airport sits on only 282 acres, it is adjacent to a 2,600 acre non-airport property called Scottsdale Airpark. There are supposedly seven miles of taxiways within this commercial park.

Some offer this development as a model for how to stimulate the local economy with the airport/commerce combination. However, it is not clear just how much of the economic stimulus is solely attributable to the airport and aviation; i.e., would the net economic benefit be any less (or perhaps even greater) if the aircraft on this airport were located at other airports? The substantial decline in based aircraft and annual operations, as well as the receipt of dozens of FAA/AIP grant subsidies, would seem to suggest that this airport is nowhere near as economically beneficial as some claim it is.

This is an airport with a rich and rather unique history. The airport began in 1942 as a massive military flight training facility, and graduated more than 5,500 students in the next 27-months. After the war, the property became a college campus, and then an academy for the Seventh Day Adventist Church. Eventually, the airport portion was leased by the City of Scottsdale. It was not until 1967 that the City found their first airport tenant and an FBO, and began to develop the airport/airpark.

The airport’s history webpage says that in 2004 there were over 450 aircraft based at Scottsdale. That number declined to 306 at the end of 2012. An exceptionally large portion of these (95) are business jets. 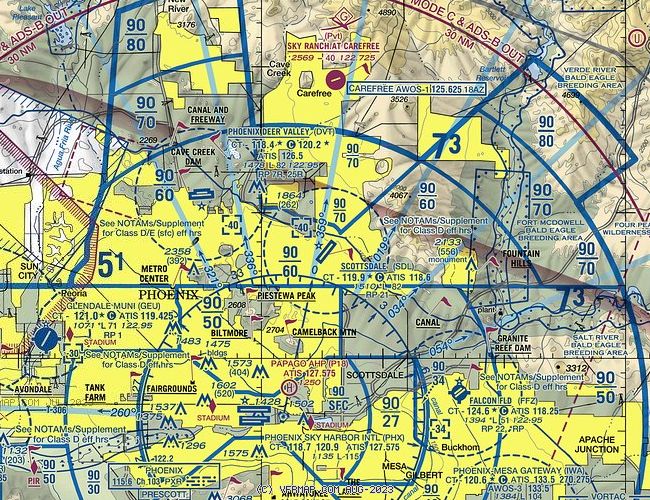