The Spirit of St. Louis Airport opened in 1964 as a private airport, to relieve pressure from Lambert-St. Louis International Airport (KSTL), 14-miles to the east. At that time, KSTL (and other mid-continent airports, such as KMCI in Kansas City) were used as critical fuel stops for transcontinental flights. KSTL was thus a major airport, and the homebase/hub for one of the largest U.S. air carriers, TWA. With the development of jets capable of nonstop transcontinental flights without fuelstops, airports like KSTL and KMCI saw substantial decline.

The 1,300 acre airport became publicly operated in 1980, when it was acquired by the county. Today, there are 453 based aircraft, of which a significant number are jets (112) and helicopters (24). An FAA air traffic control tower is open for 17-hours everyday. Airport information indicates there is intensive helicopter training at this airport, as well as noise abatement program. In 2012, the airport averaged 307 daily operations, and 42% of these takeoffs and landings were in the local traffic pattern.

The data indicate a substantial decline in operations, with 2012 operations down 36% from 1990 and down 47% from the peak traffic of 1998. Despite this decline, a new parallel runway was constructed with federal funds and opened in 2007.

An interesting point of airport history was the flood of 1993, which buried the airport in 10-12 feet of water. At the time, 720 aircraft were based at KSUS; nearly all of them were flown out prior to the flood, and an entire runway at Lambert-St. Louis International Airport (KSTL) was set aside for parking these aircraft. 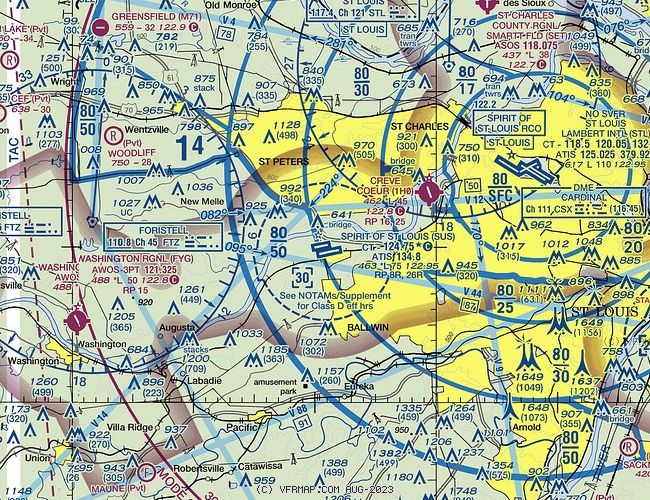