In 2013, KHIO passed KPDX to become the busiest airport in Oregon. KHIO has an FAA control tower open daily from 6AM to 10PM. Its operations are primarily flight instruction for students, many of whom are imported from China and other countries. LEAD and NOISE pollution issues are amplified by the very high volume of helicopter flight instruction.

There are also a number of corporate shuttle flights and corporate jets, mostly associated with the nearby tech-related industries.

HIO leads all Oregon airports in lead pollution from 100LL aviation gas. This is a deep concern to airport neighbors, due to lead-related health hazards.

Take a close look at the graph above, showing annual operations. The light blue line shows itinerant traffic, much of which are people using their aircraft as transportation. The red line above represents local pattern traffic, almost all of which are training flights for students at Hillsboro Aviation and a couple other airport businesses. The businesses make good money importing students from all over the world (mostly from Asia and Europe), while kicking up lots of noise and dust, and also polluting the air we breathe with aviation lead. Notice that these training operations are far greater than the transient operations. The normal condition, at most other airports, is the reverse: local pattern traffic is usually just a fraction of itinerant traffic. 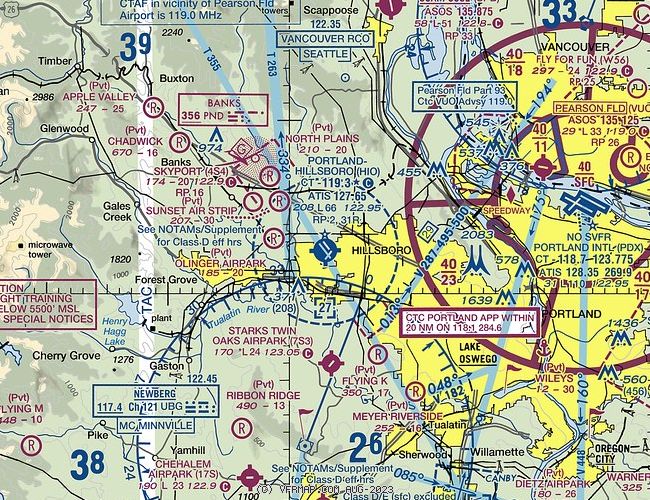 A new article just came out, discussing the adverse impact of lead, and the reality that small aircraft are the largest source of lead pollution today. The article was written by Rebecca Kessler, and appears in Environmental Health Perspectives. EHP is a peer-reviewed, open access journal published by the National Institute of Environmental Health Sciences. PDF

News Release by OAW, regarding their 12/26/12 filing of a notice to appeal a Hillsboro decision to LUBA. The essential complaint is that the Hillsboro City Council improperly relinquished their responsibility to protect the health of airport neighbors. The citizens breathe air polluted with aviation lead, which EPA ordered FAA to remove four decades ago. related article

Many impacted airport neighbors believe that ‘HAIR’, the ’roundtable group’ put together by Port of Portland, is dominated by aviation interests and fails to represent citizen concerns.

Article noting HIO is a substantial source of lead pollution, due to the intensive training of foreign students in aircraft using low-lead aviation fuel.

In their decision, the U.S. Court of Appeals agreed that citizen process was deficient. “…we GRANT the petition for review. We REMAND this case to the FAA with instructions to consider the environmental impact of increased demand resulting from the HIO expansion project….” FAA did nothing after the remand. related post

An analysis of background to the hearing scheduled for 2/9/11, at the U.S. Court of Appeals in Seattle. The eventual appeal decision was a victory for airport neighbors, as the proposal to add a parallel runway at HIO was rejected and remanded for further citizen input.

A newsletter with numerous articles defining the adverse impacts of HIO airport.