Portsmouth International Airport at Pease is a joint civil/military airport formed in the early 1990’s, after the closure of the Pease Air Force Base. It has a single runway measuring 11,321′ by 150′ on 3,000 acres. The property is a designated Foreign Trade Zone, offering tax advantages within the Pease International Tradeport.

The earliest airport was started by the city in the early 1930’s. It was used by the Navy during WWII, and then grew into an Air Force Base (housing a SAC bomber wing) in the mid-1950’s. Base closures led to the formation of a redevelopment authority. The formal transfer of two large parcels totaling 3,000 acres from the USAF to the Pease Development Authority, occurred in 1992 and 1997. Although the airport has a huge runway and plenty of space for development, it presently serves as just a quiet GA airport, with no regularly scheduled passenger or cargo service. This may be due to the fact that KPSM must compete with established airline service at nearby airports; for example, Southwest operates out of Manchester [KMHT] 30-miles to the west, numerous airlines fly out of Portland, ME [KPWM] 45-miles to the northeast, and Boston’s Logan Field [KBOS] is only 50-miles to the south. Despite the dim prospects, FAA AIP funds are regularly awarded to this airport; in fact, as of FY2009, there were 44 AIP Grants issued in roughly seventeen years.

There are 100 civilian aircraft based here, including 79 single-engine props, ten multi-engine props, nine jets and two helicopters. The airport also houses the 157th Air Refueling Wing of the New Hampshire Air National Guard, with eight military aircraft. A control tower staffed by DoD personnel is open 24/7. The Form 5010 states that the airport had 39,954 operations in the year ending 9/30/12, which averages out to 109 operations per day (or, two takeoffs per hour of ATC service). Of those operations, 4,814 (13 operations per day) were commercial (almost entirely air taxi).

The airport still has no substantial regularly scheduled passenger airline service. Allegiant Airlines offered Florida service from 2005, but pulled out in 2007, then returned with two flights per week in late 2013. 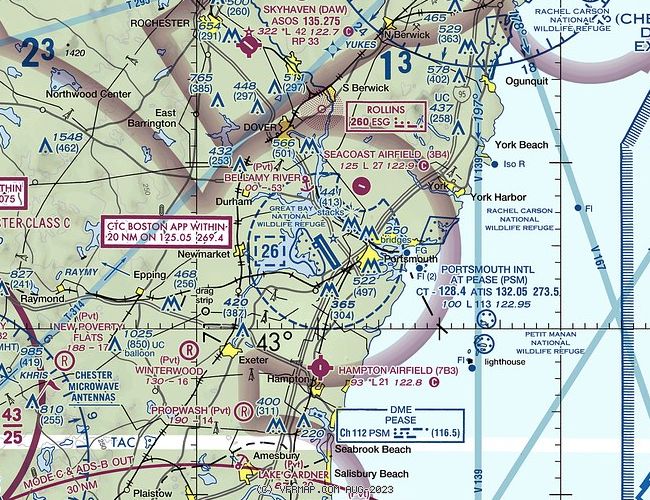