“Those who cannot remember the past
are condemned to repeat it.”

In the early 1970’s, just a few years after Congress passed the Freedom of Information Act (FOIA), Secretary of State Henry Kissinger was remarkably candid in a transcribed conversation:

This he said during the time period when the Pentagon Papers were leaked, when the Malek Manual guided federal managers on how to get rid of unwanted employees, and when President Nixon was authorizing dirty work like the Watergate break-in. This transcription (and many others) was not released to the Public until three decades later.

Fast-forward more than forty years, to today’s digitized world. On July 12, 2007, a U.S. military helicopter circling over the streets of Baghdad, opened fire on a group of nine men in an open courtyard. Two reporters from Reuters News Service were among those killed. Reuters sought information with a FOIA request, but they were denied. Then, in April 2010, a video responsive to that FOIA request showed up, via Wikileaks. It is viewable online (though it is a disturbing experience to watch, in what feels like a lethal and inhumane turkey shoot against people). Young Bradley Manning, born in 1987, later takes credit for giving that video to Wikileaks. Here is what Manning had to say about the video: 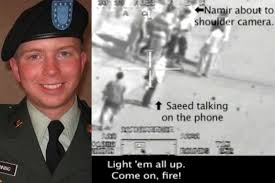 “…The most alarming aspect of the video to me, however, was the seemingly delightful bloodlust of the aerial weapons team. They dehumanized the individuals they were engaging and seemed to not value human life by referring to them as ‘dead bastards,’ and congratulating
each other on the ability to kill
in large numbers….”

One is a very gifted and accomplished adult, a Nobel Prize winner who served within the inner circle of perhaps the most corrupt presidential administration in U.S. history, though he never spoke up to inform the Public. The other is a young man trying to serve his country. He becomes aware of failures in which people are actually being killed. He likely feared that his own military organization would not accept his speaking up about the failures, so he ‘blew the whistle’ to the outside world, sharing stale records via Wikileaks. How stale? The video of the 2007 Baghdad aerial attack was nearly three years old when it was leaked. The Army had given Manning clearances and access to records, and these records were accessible to who knows how many thousands around the world. The Army was so indifferent about the possible leaking of these stale records, that nothing stopped Manning from easily making digital copies on music CD’s and camera memory cards. While his action put nobody into direct danger, it did inform the Public … nearly three years after the aerial attack.

One has to wonder: why did it take nearly three years for the Public to learn about the failures of July 12, 2007? Shouldn’t the military leaders have had an ethical obligation to share that video way back in 2007, when they reviewed the airstrike and assessed the kills and recognized that the strict military discipline of their soldiers had temporarily failed? It sure seems like the military should have been open; but, maybe instead, in 2007, they saw the need to sweep it all under the rug. Which has happened before… 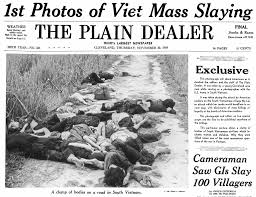 When the My Lai massacre happened in March 1968, U.S. military officials were immediately aware of the massacre, as it had been fully reported by Warrant Officer Thompson. Predictably, the Army buried the story. One concerned soldier, Ron Ridenhour, quietly investigated, collecting details from fellow GI’s. When Ridenhour came home, he blew the whistle in early 1969 with letters to thirty members of Congress and other high officials. It took twenty months for the press to catch up with history, and share the details with the Public. This photograph, published on November 20, 1969, became the key image driving Public outrage.

The spin is another extraordinary and disturbing story. Initial reports included congratulations to the soldiers for prevailing in ‘a fierce firefight’. A mimeograph from an official press briefing read: “In an action today, Americal Division forces killed 128 enemy near Quang Ngai City. Helicopter gunships and artillery missions supported the ground elements throughout the day.”

Although hundreds were killed, the massacre was eventually ‘tidied up’ by attributing it to one junior officer. Most soldiers refused to testify. Eventually, that one lieutenant was found guilty and served time. No other officers were convicted. Such is the capacity for a closed unit to hide the truth.

In Kissinger’s time (and leading up to his winning the Nobel Peace Prize in 1973), we had the My Lai massacre. On March 16, 1968, as many as 500 Vietnamese civilians, mostly women, children and elderly men, were gunned down by American GI’s.

One American pilot, Warrant Officer Hugh Thompson, was shocked at what he saw. While doing his job providing helicopter support, he interacted with the rogue ground units, and went so far as to question who gave the orders to shoot. He took action to get assistance for some civilians in need, then came back later to find them shot. He then took additional action to protect some schoolchildren, including flying them out of danger. At the end of the day, he reported what he saw. For these efforts, he was issued a ‘Distinguished Flying Cross’; he promptly threw it away, because the citation grossly misrepresented the events, declaring he had rescued an injured girl “from intense crossfire.” It was thirty years later before his heroics were finally recognized with a Soldier’s Medal, and a citation that more accurately read: “…for heroism above and beyond the call of duty while saving the lives of at least 10 Vietnamese civilians during the unlawful massacre of non-combatants by American forces at My Lai.” It took thirty years for this extraordinary military failure to be squarely acknowledged.

On the day of the attack, US military officials in Baghdad said that the helicopters had been called in to help American troops who had been exposed to small-arms fire and rocket-propelled grenades during a raid. “There is no question that coalition forces were clearly engaged in combat operations against a hostile force,” Lt. Col. Scott Bleichwehl, a spokesman for the multinational forces in Baghdad, said at the time.

But the video does not show hostile action. Instead, it begins with a group of people milling around on a street, among them, according to WikiLeaks, Noor-Eldeen and Chmagh. The pilots believe them to be insurgents, and mistake Noor-Eldeen’s camera for a weapon. They aim and fire at the group, then revel in their kills.

“Look at those dead bastards,” one pilot says. “Nice,” the other responds.

A wounded man can be seen crawling and the pilots impatiently hope that he will try to fire at them so that under the rules of engagement they can shoot him again. “All you gotta do is pick up a weapon,” one pilot says.

A short time later a van arrives to pick up the wounded and the pilots open fire on it, wounding two children inside. “Well, it’s their fault for bring their kids into a battle,” one pilot says.

At another point, an American armored vehicle arrives and appears to roll over one of the dead. “I think they just drove over a body,” one of the pilots says, chuckling a little.

While Kissinger’s story may be new to some of us, we all know (and debate) how we got to Manning’s story. At the time of the aerial attack, we had been mired in Iraq for more than four years, and still had not found those alleged ‘weapons of mass destruction’. Instead, we found a lameduck president whose approval rating had steadily declined to less than half his ‘disapproval’ rating. And, we found an economy beginning to crumble, and clearly on the verge of collapse.

Our larger culture had disintegrated, too. We had become obsessed with security and control: airport lines and 3-ounce containers; ‘warrantless wiretaps’ and ‘state secrets’. The level of fear and distrust between regular citizens was peaking. It was the worst of times to be ethical and, by 2007, especially in federal workplaces, it had become an open season on Whistleblowers. The lethal failure of military discipline in Baghdad was videotaped in July 2007. In that same month, FBI agents conducted gestapo-style raids into the homes of citizens, connected to the Thomas Drake Whistleblower case. Why? Because Drake had exposed waste, fraud and abuse within the security hierarchy at NSA.

And we are still feeling the damages today. Some would reasonably argue that the fog of distrust in those years – practically a collective paranoia – eventually rotted the foundations of our political system to a point where real problems could no longer be addressed, let alone resolved. Where news outlets serve only power while knowingly manipulating the Public. Where we are, in short order, destroying the future, to the detriment of our own children.

Nobody Wins, and Everyone Loses

In  Vietnam or in Iraq or in the next hellhole, war is not clean. We understand it is filthy and horrific, and as Kissinger would agree, some damages are immediate, some take a little longer, and some set in years later, in illness or even in suicide or homicide.

In war, rules are broken, lives are taken. In a military context, a whistleblower can be very dangerous, such as if he or she tips off the enemy about an impending attack. But, once history has happened, the main hazard of a person in the military speaking up about a past failure is the risk of embarrassment to that military unit. It is an embarrassment and yet, at the same time, it is also an opportunity for the unit to improve its performance. Clearly, the value of a later disclosure, if it is used constructively to inform the Public and prevent a repeat failure, is far greater than the cost of embarrassment. That later disclosure forms the basis for Public trust of their military; the absence of that disclosure feeds Public distrust. So, why is Manning locked up?

Everyone loses when Whistleblowers are silenced or ignored. Indeed, the very existence of a Whistleblower indicates a corrupted work culture. Show me a workplace with open communications, where problems are immediately identified and resolved, and I will show you a strong and ethical leader whose employees are fully engaged, thriving, and productive; look closely, and you will find no Whistleblowers. On the other hand, show me a workplace where the leaders fail to support the Whistleblower, and I will show you inefficiency and fear and disillusionment and indifference and internal conflict … classic indicators of a failed and lost organization. You will also find a rare Whistleblower, if they can bear to stay around…

Whistleblowers should be supported, not attacked.

If President Ford could pardon President Nixon, then surely,
President Obama can
pardon Bradley Manning.
…why not?

An analysis of last week’s pre-trial hearings, in which government prosecutors are essentially declaring that anything posted on the internet might aid an enemy, thus becomes a basis for an espionage conviction. An excerpt: “…Making a government the final arbiter of what should and shouldn’t be seen on the Internet is corrosive of democracy. Claiming that merely publishing information is effectively terrorism is a nightmarish trashing of protected communications….”