…was it a preview of today’s Av-Gov Complex?

In his final speech as President, on January 17, 1961, Dwight Eisenhower warned about the dangers of a military-industrial complex growing too powerful and out-of-control. His speech is part of the public record, ready for any of us to read, and begging questions that loom even larger today, more than fifty years later:

In my opinion, he was absolutely correct. And, a brave and admirable leader to speak about it. Plus, he was not looking at only defense or CIA; he was also looking at Congress and agencies … as well as the rising private industries increasingly interconnected with government. He spoke of the reality: that organizations of all forms – private or public – tend to evolve toward a greater concentration of power and control, at the expense of individuals who see their liberties erode and even disappear. That these organizations will form a public affairs or public relations (PR) machinery that focuses very effectively on perpetuating their program, while taking public focus away from any negative consequences of that program. He also recognized (and he was years ahead of FOIA on this) that citizens MUST be “alert and knowledgeable”, hence the need for simple and full agency transparency.

It is an odd thing that, while we have this great internet tool with which to research and learn, we tend instead to blindly accept the abbreviated analyses of others. All too often, these analyses are crafted by PR elements within the ‘complex’, and designed to become widely accepted without rigorous thought or even basic knowledge. Some call it propaganda; some call it just ‘spin’. In any event, it is a problem to have a system requiring democratic engagement of all individuals, but where the participants lack real knowledge.

This problem is not so hard to correct, and to help that happen, I located a copy of Ike’s speech. I read it a few times, and did some light research about the history of his presidency, from 1953-1961. Tumultuous times. Here was a Republican president who served two terms, gave up a four-pack-a-day smoking habit, and had one heart attack and a minor stroke while in office. He presided over the emergence of civil rights equality for blacks, an issue delayed for nearly a century after the Civil War (and still not fully resolved, even today). He dealt with Krushchev and the U2 crisis and growing world fear of a nuclear demise, while also working with the rise of the CIA (which Congress had legislated in 1947). He witnessed the earliest alarms about the dangers of some of our latest and greatest technologies: DDT, thalidomide, even food colors. He signed the laws passed by Congress to form up many of the giant federal agencies we have today, including FAA. The system of Interstate highways is considered one of Ike’s greatest achievements; to build it, he raised federal gas taxes. “We cannot afford to reduce taxes, [and] reduce income,” he said, “until we have in sight a program of expenditure that shows that the factors of income and outgo will be balanced.” He thus felt it necessary to sustain the taxes until AFTER the expenses were reduced. What a novel (and responsible) idea, so different from today’s sequester approach. Most stunning (to me, anyway) was to realize that there really was a time in our past, when Republican Presidents signed bills to construct public housing and grant medicaid rights to seniors.

It sure seems like a long, long time ago… 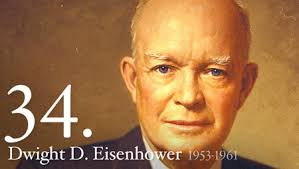 Anyway, we all should form our own thoughtful opinions, and there is no better way to form your own opinion about Ike’s speech than to read it. Or, at least, to read the portion around military-industrial complex.

“…Until the latest of our world conflicts, the United States had no armaments industry. American makers of plowshares could, with time and as required, make swords as well. But now we can no longer risk emergency improvisation of national defense; we have been compelled to create a permanent armaments industry of vast proportions. Added to this, three and a half million men and women are directly engaged in the defense establishment. We annually spend on military security more than the net income of all United States corporations.

“This conjunction of an immense military establishment and a large arms industry is new in the American experience. The total influence — economic, political, even spiritual — is felt in every city, every State house, every office of the Federal government. We recognize the imperative need for this development. Yet we must not fail to comprehend its grave implications. Our toil, resources and livelihood are all involved; so is the very structure of our society.

“In the councils of government, we must guard against the acquisition of unwarranted influence, whether sought or unsought, by the military-industrial complex. The potential for the disastrous rise of misplaced power exists and will persist.

“We must never let the weight of this combination endanger our liberties or democratic processes. We should take nothing for granted. Only an alert and knowledgeable citizenry can compel the proper meshing of the huge industrial and military machinery of defense with our peaceful methods and goals, so that security and liberty may prosper together.

“Akin to, and largely responsible for the sweeping changes in our industrial-military posture, has been the technological revolution during recent decades.

“In this revolution, research has become central; it also becomes more formalized, complex, and costly. A steadily increasing share is conducted for, by, or at the direction of, the Federal government.

“Today, the solitary inventor, tinkering in his shop, has been overshadowed by task forces of scientists in laboratories and testing fields. In the same fashion, the free university, historically the fountainhead of free ideas and scientific discovery, has experienced a revolution in the conduct of research. Partly because of the huge costs involved, a government contract becomes virtually a substitute for intellectual curiosity. For every old blackboard there are now hundreds of new electronic computers.

“The prospect of domination of the nation’s scholars by Federal employment, project allocations, and the power of money is ever present — and is gravely to be regarded.”

Text of SpeechVideo of Speech Eisenhower and Kennedy, at the White House, December 1960.