Tragedy,
and a manhunt,
in California.

…Can We All Just Get Along?

In late April 1992, 53 people died when the LA Riots broke out. The riots were an immediate outburst of rage, after the LAPD officers involved in the videotaped beating of Rodney King were acquitted by a suburban jury in neighboring Ventura County. The jury consisted of ten whites, one Asian and one Hispanic. While President George H.W. Bush and other leaders expressed disbelief over the acquittal, residents of South Central LA simply went to the streets. Six days of looting, arson, assault and murder were finally quelled with the use of National Guard soldiers, as well as Marines from Camp Pendleton. Total damages were estimated in the billions of dollars. It was during these riots, hoping to stop the violence, that Mr. King spoke his famous plea to a camera (which was then mis-quoted to history):

Growing up in a Racist World

Christopher Dorner was thirteen years old, growing up in LA, at the time of the riots. His ‘Manifesto’ states that he was the only African-American kid in his school, and encountered racial slurs. He went on to play football at Southern Utah University, then commissioned as a Naval Reserve officer in 2002. He joined LAPD in February 2005. A year later, he was working the patrol in the LAPD Harbor Division, when he was called up for Naval Reserve service. He deployed to Bahrain. When he returned in July 2007, he immediately resumed patrol duties at the Harbor Division. Within a month, he reluctantly reported another LAPD officer for excessive use of force, charging she had kicked a schizophrenic twice in the chest and once in the face. Three months later he was transferred to a different Division. The internal investigation of his charges produced no action against the officer who allegedly had used excessive force. Then, in June 2008, Mr. Dorner was fired on the charge that he had lied, and made up the report. A Board of Rights (BOR; departmental review of the firing) was held. They viewed evidence, including a video of the schizophrenic (Mr. Gettler) confirming he had in fact been kicked by the LAPD officer. Despite the evidence, the BOR sustained the firing. The firing action then precipitated Mr. Dorner’s ‘honorable discharge’ from the Naval Reserve. In total, as reasonably perceived by Mr. Dorner, his name and reputation, as well as his right to serve the LAPD and the U.S. Navy, were all destroyed by the LAPD insistence that he had lied when he reported an officer’s excessive use of force.

Mr. Dorner was 33-years-old on the first of February 2013, when his ‘honorable discharge’ from the Naval Reserve became official. Two days later, a young woman and a young man were found dead in Irvine, with multiple gunshot wounds. The two were engaged to marry. She was the daughter of a former LAPD captain, who had represented Dorner during disciplinary hearings related to his eventual firing in June 2008. 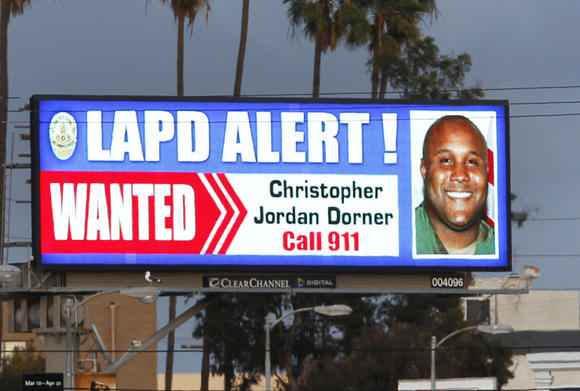 A Manifesto and a Manhunt

A copy of the ‘manifesto’ had been distributed just days before. A full version, with no redactions, was located and has been formatted into a webpage here. The original was in the form of an email and was addressed, ‘To: America … Subject: Last Resort‘. Within are detailed charges of LAPD corruption, and somehat troubling declarations by Mr. Dorner (including what effectively is an admission to his recent killings). There are also quite a few pages that ramble, with kudos and takedowns directed at dozens of public figures: Hillary Clinton, Charlie Sheen, Cardinal Mahoney, and celebs from Dave Brubeck to Jennifer Beals to Anthony Bourdain … so many ‘thank-yous’ delivered with a tone of ‘good-bye’. He goes to great length to attack Wayne LaPierre, NRA and the gun-rights lobby. He even gives praise to the surgeon who worked on his knee in 1998. His ramble goes all over the place, and implies a stressful condition. It closes abruptly, as if the battery finally died, with this sentence:

“We cannot address this nation’s intolerant issues until we address our own communities morality issues first. Accountability. We need to hold ou….”

As for the manhunt, it continues in the hills outside of LA. Anxiety is high. A 47-year-old Hispanic woman and her 71-year-old mother (who bear absolutely no resemblance to Mr. Dorner), were doing an early morning newspaper route in Torrance when LAPD converged upon their truck and shot it full of holes. At least seven officers opened fire. Thankfully, nobody died.

The violence Mr. Dorner has shown is abhorrent, but it is important to understand the history behind that violence. Especially, the LAPD Consent Decree.

The Rodney King incident happened in 1991. In 1999, the Rampart Scandal broke. More than 70 LAPD officers had participated in a wide array of illegal conduct, including shootings, beatings, framings, and perjury. At the heart of the scandal were deep patterns of racism, in which police officers were routinely abusing their authority. In the cleanup,  more than a hundred criminal cases were dismissed, and nearly $90 Million was paid to settle the civil lawsuits filed by the victims.

The problems at LAPD were deeply entrenched. LAPD simply could not police itself. The U.S. Department of Justice (DoJ) investigated and, by May 2000, they were ready to file a lawsuit against the City of Los Angeles, for a pattern and practice of police corruption. To avoid that scenario, the Consent Decree was negotiated, wherein DoJ would actively monitor LAPD for a period of at least five years. The language of the consent decree contained the standard language whereby accountability vanishes; all claims for violations were resolved, and:

“Nothing in this Agreement, the United States’ complaint, or the negotiation process shall be construed as an admission or evidence of liability under any federal, state or local law…”

All that history, including Rodney King and the Rampart Scandal, all those settlements totaling $90 Million, and all those dismissed criminal cases, and the end result is No Admission of Liability. Incredible.

What can we learn from this?

The ‘manifesto’ takes a while to read, but is not difficult to understand. It was written under duress, and some facts may be twisted a bit, but there is also plenty of evidence suggesting LAPD officials knowingly did far more fact-twisting. In any event, a careful study does offer insight into how the mission of a huge organization such as LAPD (with over 10,000 employees) can become corrupted. The eighteen pages may also be insightful as an analysis of an otherwise good person descending into schizophrenic violence.

A thoughtful review is also instructive as regards the plight of whistleblowers. Mr. Dorner blew the whistle on an LAPD officer who applied excessive force upon a schizophrenic citizen; he paid the price for speaking up. He fought to keep his job, but was fired, then years later, he ‘lost it’, and became violent. Thankfully, most whistleblowers are strong enough to not succumb to the pressures of hostile maltreatment and injustice; most never fall to violence. But, even if we could rely on whistleblowers to never become violent, do we really want to condone the abuse of management authority that destroys families, and unravels the mental fitness of people? Is the total cost of whistleblower retaliation actually far greater than we realize?