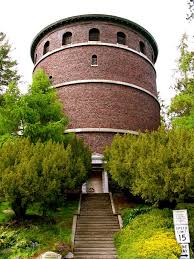 The Water Tower at Volunteer Park

A couple years ago, while visiting family in Seattle, I had the pleasure of returning to the Water Tower. Those from Seattle will know exactly what place I am talking about; for the rest of you, I will do my best to describe it.

The land rising to the east above downtown Seattle is Capitol Hill, and the highest part is Volunteer Park. One of the park landmarks is a round, brick tower, encasing a very large metal tank, and serving as one of the city’s oldest water reservoirs. At the top of the tank is a platform and arched brick openings allowing views in all directions: to Puget Sound, Mt. Rainier, the Cascades, Mt. Baker. To get to the platform, there are two spiral staircases, all metal, producing an echoing ‘thump, thump, thump’ as you climb to the top, between the metal tank wall and the interior of the brick wall. I grew up on Capitol Hill. On many days, my father would come home from his engineering job at Boeing, and he loved to take us kids out for a jog. He was staying fit for his Navy Reserve flight duties; we were just eating it up, the way kids do. Many times, this routine included going to the Water Tower. We would always race up the metal stairs. The world then was fresh and limitless, at least in the eyes of a kid.

So, a couple years ago, I returned to the Water Tower. The views are still very impressive; and, there is a definite comfort, a stability, in being able to return to places from long ago, like the Water Tower. But, at least for me, there was a little less comfort this time around. There were notices at the base of the tower, simple pieces of paper taped to the wall. The key words were ‘Due to budget cuts…’. The copies stated that the City was going to lock the gates at the base of the tower on the following days for the remainder of the year (and then a list of a dozen or so days). I thought, man, it took more work to post these notices than to just leave it alone. And, the more I thought about it, the less sense it made. Clearly, the intent was not so much to save money to fit a tightening budget; no, the intent was to pressure public outcry. Which precipitated my own thought: this is a lousy way to serve the Public.

Call it a sequester threat.

Just like the one going on right now. Most aviation news today is focusing on the furloughs to air traffic controllers and airport security, and the horrific delays (they claim) we will soon see. As posted in a CNN article: “Air traffic controllers and airport security will see cutbacks, which means more delays at airports across the country,” Obama said Tuesday in warning against the cuts as “not smart” and “not fair.”

the viewing platform atop the water tank

Look, I like President Obama and would not take back the two votes I cast for him. It was a proud moment in the life of this one American, to see the election of our first black president. It was an even prouder moment when, on his first inauguration day, he issued powerful statements directing federal agencies to become more open and transparent, what we so desperately needed after the bureaucratic/security jihad that followed the 9/11 attacks. But today, with the president (and all the media) serving as mouthpieces for sequester threats compiled by public affairs people at FAA and other agencies, I start to lose faith. Fast. Here’s why, as it relates to what I know about FAA, where I worked for decades…

Today’s news stories say that FAA has 47,000 full-time employees, but take a close look at an FAA directory, and you will find that 47,000 is just the tip of the iceberg. There are scads more contract employees, many of whom occupy space at FAA Headquarters or at the Regional Offices. Look more closely at the organizational structure. The names of the different FAA units are dizzying with heir redundant overlap; it appears they have a division to monitor a division to oversee the division that runs air traffic control (yes, three layers, and all are fat with employees). And, despite all that redundant layering, they still have serious problems with concealed errors. But, that is just the large picture.

Look more closely at FAA pay, which is the reason for the threats of delays. In the past two years, I happened to research pay levels for a few employees related to my own case. Simple online research, viewing publicly available information. What I found was shocking. So many FAA officials being paid at the top of the federal payscale, which was $180K in 2010. In a full-blown whistleblower retaliation case, such as mine, it is normal to have agency officials from all areas deeply involved: HR, LR, medical, legal, security, and of course air traffic. At the Regional Offices, there are dozens of top-pay employees: the Regional Administrator, the Regional Flight Surgeon, the Regional Counsel, and so forth. In the field, large ATC facilities commonly have a dozen or more top-pay managers. In my retaliation case I found: at least ten of the few dozen who concealed records and otherwise denied me my Due Process were maxed out at $180K/year on the federal pay scale (my shock was doubled in that, I had assumed by their performance, they must be very poorly compensated and demoralized). In fact, of those few dozen officials, only a tiny minority (typically the secretaries) were making less than $120K/year. It was astonishing; no wonder everyone was so disinclined to speak up, to say what they knew!

And it is not just the legions of FAA officials ensconced in these offices, far from the front lines, who are raking in this level of pay. It is also the controllers. Controllers fully certified at en route centers are predominantly pulling in from $150,000 to $180,000 per year. That is what FAA has become: enormous pay to federal civil servants who, when they face a possible furlough pay reduction, direct their energies toward threatening slowdowns and other public pain.

But, how about the real world, where people can no longer afford college and medical costs, and where many are taking fewer airline trips because their spending money is constricting? How does this posturing by controllers and FAA managers look to them?

Where I live in Oregon, we’re still logging the forests, but most of the logs are being shipped to China. There just are not that many mill jobs anymore, and the mill owners are famous for suddenly shutting things down with no warning. I have neighbors who are thrilled to pull in more than $30K a year. I see young adults scrambling to land dead-end, minimum-wage jobs, and hoping they can net $15K a year. Meanwhile, I know many other FAA employees who were allowed to retire on their own calendar, who then brought in $40-$70K in annual pensions WHILE ALSO double-dipping with contract jobs back at FAA, paying another $50K+ annually.

And so, today, the news outlets, including the resident at the White House (when he feels inclined to act as a spokesperson) are all scaring us with the prospect of more airport delays, while saying nothing to address the real gross inefficiencies within the FAA. Just one of those top-of-the-payscale FAA headquarters jobs translates to four or even six solid jobs for a young father or mother. Every FAA employee doing the double-dip is robbing an average of three young people, who remain stuck, wasting their youthful energies and enthusiasm waiting for a start.

This is not only Wrong, in the Larger Picture it is Tragic.

And how did it evolve into this? There is a lot of evidence to support the fact that, when the controllers union (NATCA) and FAA management are in dispute, the most common solution in recent decades has been to simply throw more money at it. And, in truth, Congress ON BOTH SIDES loves to throw money, because it always translates to more money back to their constituents. So, what we have is an elaborate dance, a choreographed show, which results in higher funding to the controllers, a tide that quickly lifts all FAA boats. And, once pay is ratcheted up, it virtually never slides back down.

Two parts, and it all centers on transparency.

First, FAA must clean up from decades of promoting managers into top-pay positions with no apparent purpose other than to collect paychecks and build time toward retirement. Those fuzzy and redundant positions at FAA Headquarters, in the Regional Offices, and the supplemental positions in the District Offices (and other large facilities). From my research in the past couple years, and from my decades of FAA work experience, I know that a thorough and objective DoT-IG investigation would reveal that many of these promotions were made to buy silence from witnesses to whistleblower retaliations, coverups, safety failures, and the like. It is bad enough to silence your witnesses, but just the dollar cost of this bad habit is prohibitive.

Second, take full advantage of today’s information technologies and embark on a fresh start with total transparency for all FAA spending, such that any citizen can see the details online. Every position (FAA or contract). Every purchase. Every service contract. This is public money; we should all be able to see exactly how it is spent. 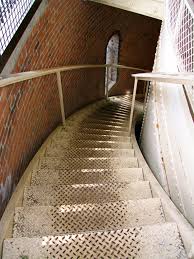 …where do we go from here?

This system is failing because we are stuck with ‘refuseniks’ in both parties, Republican and Democrat, who fail to lead and instead mire our fiscal problems even deeper. I would hope that, from here onward,  President Obama will insist that he will NOT advocate for continued spending for a specific agency until that agency shows in a clear presentation – and with full transparency to the entire public – how those funds will be spent, with added proof that all spending is of value.

It’s the mid-1960’s and there is a ‘thump, thump, thump’ echoing in the Water Tower. The metal steps are vibrating, and kids are shrieking. They thrill to win the race. They long to discover the wonders of a big world yet to learn.

Nearly fifty years later, the Water Tower endures, but the wonder has dimmed; we seem stuck on locking those gates…