The Cessna was able to return and land after the midair and then parked on the runway. Notice the missing right main gear (in the shadow), which evidently fell off during or shortly after the impact.

A Cessna C152 had a student pilot and instructor on board. A Cirrus SR22 had just a pilot on board. The photographic evidence indicates that the right main gear of the Cessna impacted the Cirrus windscreen on the passenger side. The accident happened shortly after 8am on Friday, February 1st.

Practically speaking, given the damage as well as the location of the Cirrus prop (and assuming there is no damage where the prop possibly nicked the right main gear), it would seem that the Cessna had to approach the Cirrus from the right side, possibly at a right angle, but as likely from an oblique angle. Of course, the important thing for these three people, is luck was on their side and the glancing blow was just light enough to ensure they could both control their aircraft back to the airport.

The SR22 windscreen was damaged on the passenger side, after impacting the right main gear of the Cessna.

The instructor did a very good job bringing the Cessna to a safe stop. He had to touch down on the left main gear, settle the nosegear, and then reduce speed before dragging the strut where the right main gear was missing. His technique was sufficient to keep the Cessna moving straight down the runway.

It will be very interesting to see the report by NTSB or FAA, that analyzes how this midair occurred. One of the primary hazards of general aviation operations is that the probability of a midair collision is substantially higher just outside the controlled airspaces. In this case, controllers in the CLL tower would lend an extra set of eyes and help keep pilots informed of the other traffic. But, once the aircraft 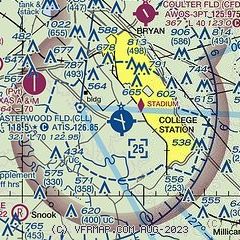 get to be 4-5 miles from the airport, they are essentially on their own. Compounding the hazard is the fact that pilots are habituated to flying at set altitudes; i.e., because the CLL airport elevation is 322′, these pilots will tend to level at 1,500′ or 2,000′ or 2,500′ MSL, as set using their altimeters.

UPDATED 2/25/13… NTSB has released preliminary information, which shows the impact occurred at 3,500′ MSL, with the Cirrus on autopilot, inbound from Austin Executive Airport (KEDC), thus heading slightly north of due east, while the Cessna was southeast-bound on a second instructional flight. Other news articles show that the Cirrus was a demonstrator ‘owned’ by the Editor-in Chief at Flying magazine, Robert Goyer (though one of his friends was flying it alone at the time of the collision). The comments in the Flying article, mostly by pilots, are noteworthy; they point out the potential hazard of Cirrus pilot’s moving fast at low altitudes, depending too much on automation, and not maintaining a sufficient scan outside the airplane. The comments also touch upon the likelihood the pilot being distracted by his cellphone or other electronic devices.